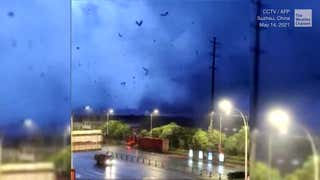 At least 12 people are dead and 300 injured after a pair of tornadoes ripped apart homes and other buildings in southern and eastern China Friday night. While one tornado hit the city of Wuhan, another one ripped through Shengze, which is in Jiangsu province,

Local government officials said eight people died in the city of Wuhan, which is known to be the ground zero of the ongoing coronavirus pandemic, The Associated Press reported.

“I’ve grown up in Wuhan and I’ve never seen anything like it,” one resident of the city posted on China’s Weibo app, according to Reuters. “There’s been so much extreme weather recently.”

At least 28 homes were destroyed and 130 damaged in Wuhan, according to the official Xinhua News Agency.

Li Shengchun, a 56-year-old construction worker who witnessed the tornado, told the agency that more than 60 workers were inside three prefabricated houses torn down by the storm.

“It became stormy and dark all of a sudden,” Li said. “I felt the house shook, and in a few seconds, the second floor collapsed to the ground.”

More than 170 rescuers as well as fire crews and sniffer dogs were searching for trapped people. Four people died in town of Shengze, about 62 miles southwest of Shanghai, where heavy thunderstorms also hit. At least 84 homes and 17 businesses were damaged in Shengze, which is in Jiangsu province.

Severe weather isn’t unheard of this time of year in China as what’s known as the mei-yu front moves in.

“During the late spring and early summer months, the mei-yu front drifts northward through China and the neighboring countries,” weather.com meteorologist Jonathan Belles said Saruday. “Late Friday, this already wet boundary appears to have broken up into several supercells across central and eastern China.”

Those supercells produced the tornadoes.

“Additional rounds of heavy rain and some severe weather are likely as this front moves northward over the next several weeks,” Belles said.

The Weather Company’s primary journalistic mission is to report on breaking weather news, the environment and the importance of science to our lives. This story does not necessarily represent the position of our parent company, IBM.