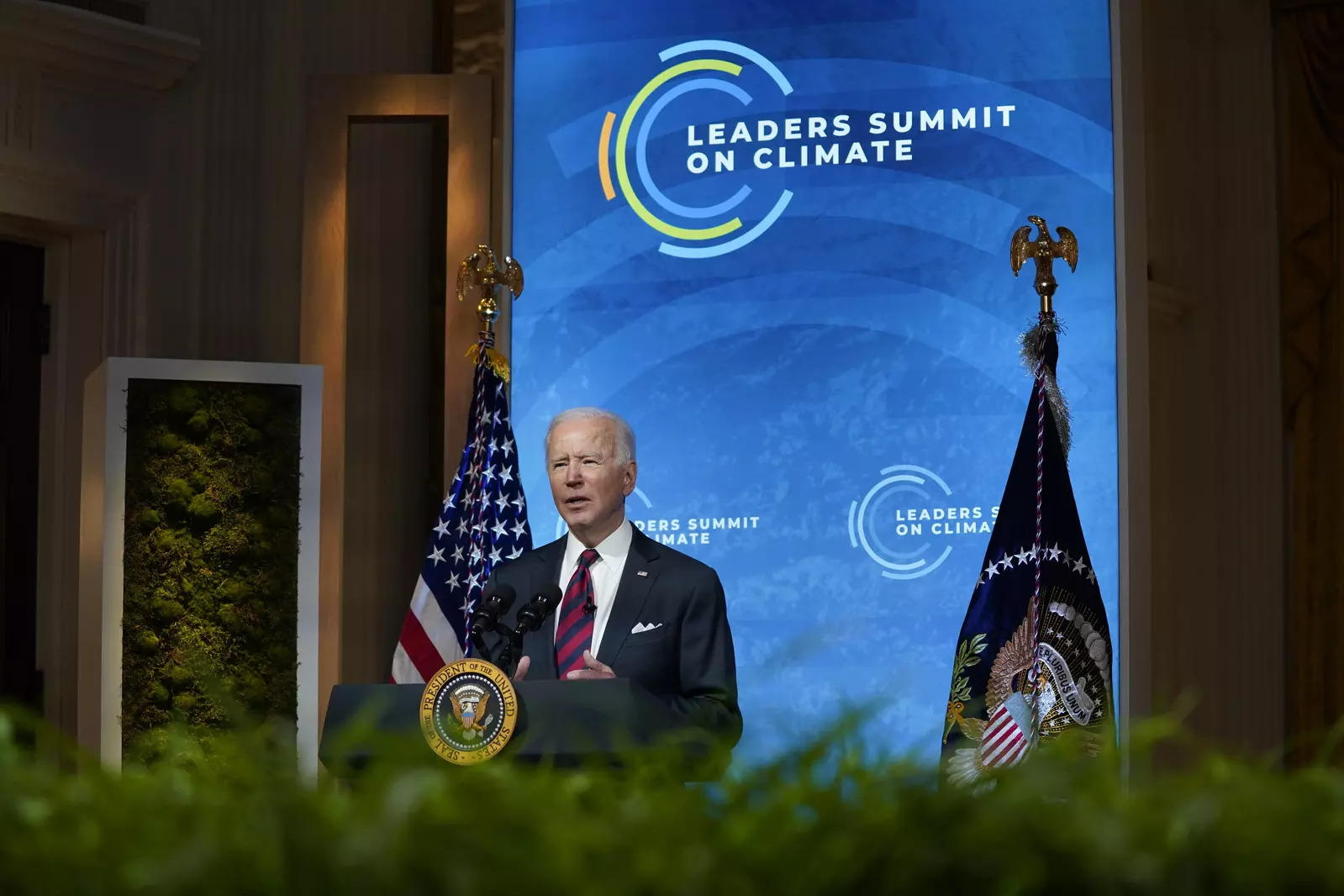 It was an exhortational end to an unusual pandemic-era summit hosted from a specially created TV-style set in the White House East Room. Biden’s two-day gathering briefly united the heads of global rivals America, China and Russia – on screens, anyway – long enough to pledge cooperation on climate. It also saw the U.S. and a half-dozen allies commit to significant new efforts and financing to reduce climate-damaging emissions.

Friday’s closing message: Go forth and spend, making good on pledges for rapid transitions to cleaner vehicles, power grids and buildings to stave off the worst of global warming.

“The commitments we’ve made must become real,” declared Biden, who is seeking $2.3 trillion from Congress for legislation that would partly go for electric charging stations, for laying out an efficient new national electrical grid and for capping abandoned oil and gas rigs and coal mines. “Commitment without doing anything is a lot of hot air, no pun intended.”

“We’re gonna do this together,” Biden said, speaking live to a final Zoom-style screen of leaders of national governments, unions and business executives around the world.

His closing message echoed the sentiments of Kenyan President Uhuru Muigai Kenyatta, who told the summit: “We cannot win this fight against climate change unless we go globally to fight it together.”

Compared to the United States and other wealthy but carbon-addicted nations, Kenya stands out as a poorer country closing the technology gap despite limited financial resources. It has become a leading user and producer of geothermal and wind power. Small solar panels that charge lights and mobile phones have become cheap enough for some poor households to replace their kerosene lanterns. Opposition has stalled work on what would be its first dirtier-burning coal-fired power plant.

Prime Minister Mette Frederiksen of Denmark renewed her country’s pledge to end oil and gas exploration in the North Sea, switching from offshore oil and gas rigs to wind farms.

Biden convened the summit showcasing the United States’ own high-profile return to international climate efforts after President Donald Trump’s withdrawal. Biden used the summit to announce he intended to cut U.S. coal and petroleum emissions in half by 2030, nearly doubling the previous target.

Publicly, there had been no firm word up until this week that Presidents Xi Jinping of China and Vladimir Putin of Russia would accept Biden’s summit invite, given disputes with the U.S. over nonclimate issues.

But they did, despite concerns that international isolation and domestic political conflict under Trump had weakened the United States.

“Nations still want to come to the party that the U.S. throws,” said Alice Hill, a senior fellow for energy and environment at the Council on Foreign Relations.

Xi, whose country is the world’s No. 1 climate polluter, held out the possibility in his summit speech of moving faster to slow China’s building of new coal-fired power plants.

South Korea’s announcement at the summit that it would stop funding new coal-fired power plants abroad increased pressure on China and Japan, which still do, analysts said.

It was all in service of an argument officials say will make or break Biden’s climate vision: Pouring trillions of dollars into clean-energy technology, research and infrastructure will speed a competitive U.S. economy into the future and create jobs while saving the planet.

While technological development and wider use has helped make wind and solar power strongly competitive against coal and natural gas in the U.S., Biden said investment also would bring forward thriving, clean-energy fields “in things we haven’t even thought of so far.”

Republicans are sticking to the arguments that Trump made in pulling the U.S. out of the Paris climate accord. They point to China as the world’s worst climate polluter and say any transition to clean energy hurts American oil, natural gas and coal workers.

“No one is being asked for a sacrifice,” Kerry said. “This is an opportunity.”