Connecting the World Through the Panama Canal -

Connecting the World Through the Panama Canal


The Panama Canal has improved global commerce, transportation, and connectivity for more than 100 years. Through its shortened route and strategic location, the Panama Canal continues to expand its partnerships across the world and innovate its services to uphold its commitment to creating, capturing and rendering value to its customers and Panama.

Since the opening of the Neopanamax Locks in 2016, the Panama Canal has come to serve 36 new maritime routes, connecting an additional 220 ports and 10 countries. Today, the waterway serves a total of 180 maritime routes that link 1,920 ports across 170 countries. Through this expanded number of routes, new terminals have become points of origin or destination for cargo that transits the Canal, such as the liquefied natural gas (LNG) export terminals of Cove Point and Cameron in the United States and Port of Point Fortin in Trinidad and Tobago.

The United States remains the top user country of the Panama Canal, with two-thirds of cargo transported through the waterway originating from or destined for this market, followed by China and Japan. 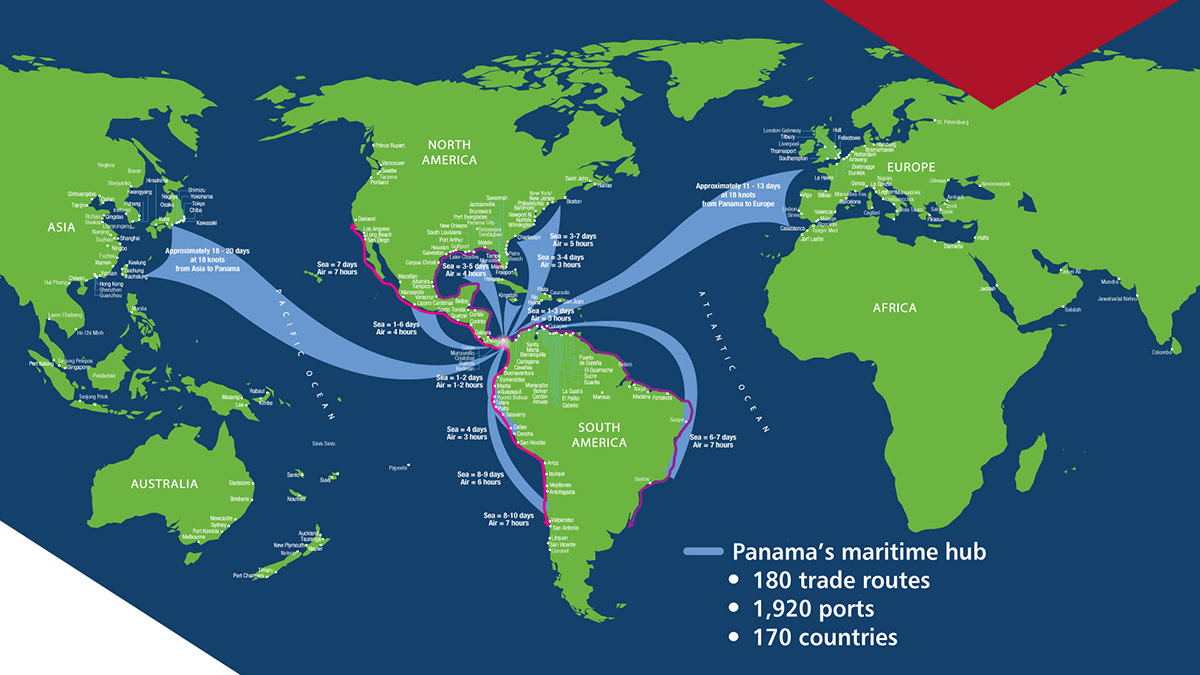 Traditionally, the dry bulk market has been and continues to be important in terms of the cargo tonnage transported through the Panama Canal. The main commodities moved in bulk cargo vessels consist of soybeans, corn and miscellaneous grains. The grain flows originate in U.S. ports located on the Gulf of Mexico region destined for China, the West Coast of South America, Japan and the West Coast of Central America. Soybeans are the most prominent commodity crop that navigates the Mississippi river to be shipped through U.S. ports bound for China. Corn shipments from the same ports are often bound for Japan and Peru.

In the last months, grain exports through the Canal have increased as U.S. exporters meet soybean demand to feed livestock and poultry in China.

While various market segments have contributed to the Canal’s widened reach, the LNG and liquefied petroleum gas (LPG) market segments saw exponential growth in recent months. The world’s global economic recovery, combined with record low temperatures during the winter in Asia, heightened demand for energy during what was already peak season.

The LPG segment saw particularly high growth during the Canal’s 2020 fiscal year (FY2020), which ran between October 2019 and September 2020, recording Panama Canal tons (PC/UMS) tonnage 27 percent higher than projected. In that same period, 95 percent of LPG traveling through the waterway originated from the U.S., followed by Trinidad & Tobago with almost 3 percent. Almost half (49 percent) of all U.S. LPG exports passed through Panama Canal during this time, with a majority destined for either South Korea or Japan.

Connectivity Through the Green Route

As the Panama Canal’s network expands, so does its positive environmental impact. Already, the Canal has contributed to a reduction of more than 830 million tons of carbon dioxide (CO2) since opening by allowing vessels to save time and fuel through reduced voyages and fewer cargo movements compared to freight transportation via air, truck or rail.

The Panama Canal has been able to steadily manage the water issue, to safeguard an operational level of water and its longstanding reliability for customers. This dry season, the Canal saw positive results from the measures implemented last year. The Panama Canal was able to secure a steady draft for this period through the waterway, allowing shippers to carry more cargo using the Panama route.

Through its unprecedented connectivity, the Panama Canal has facilitated the development of world maritime trade, unlocking opportunities for connectivity and exchange between countries and markets. We are a link in a chain where reliability is the most valued attribute, and we are committed to continuing to invest in and build upon our role in connecting the world.
Source: Panama Canal Authority