Covid is back. Can battered economy absorb second wave shock? -

Covid is back. Can battered economy absorb second wave shock?


The scars left by the first wave of the Covid-19 pandemic have hardly healed and India is already facing a nastier second round of infections. On Friday, India reported over 1.31 lakh Covid-19 cases, marking the third day in a week when daily cases exceeded 1 lakh.

The resurgence of Covid-19 cases has not only posed a fresh challenge to the healthcare system, but also the battered economy that has hardly recovered after exiting a recessionary phase a few months ago.

The second wave could not have hit India at a worse time. It has disrupted hiring plans of corporates, increased business uncertainty and crippled operations. All of these factors could aggravate problems for India’s working class, especially low-income earners and migrant labourers.

Two recent surveys conducted by the Reserve Bank of India (RBI) have suggested that the economic situation could worsen in the wake of renewed restrictions to contain the rapid surge in Covid-19 cases.

“Consumer confidence for the current period weakened in March 2021 as the current situation index dipped further in the negative territory on the back of deteriorating sentiments on the general economic situation, income and prices,” the survey said.

A decrease in footfall and sales due to fresh Covid-19 curbs may force some small traders to shut shop permanently.

Consumers are also worried about rising inflation, which increased sharply to 5.03 per cent in February, according to the second survey conducted by the central bank. To make matters worse, inflation is expected to hit a four-month high in March.

The two surveys highlight a worrying trend. If consumers are worried about rising cases, spending is likely to reduce sharply and the subsequent effect could be felt by businesses who were on the initial recovery path after a year of devastation.

Localised lockdowns and curbs will severely disrupt manufacturing activity — key to economic growth — if they last for a prolonged period. This will lead to lower GDP growth in the first quarter of FY22.

Though it remained above the 50-level separating growth from contraction, prolonged curbs could quickly change that, fear experts. Meanwhile, a sub-index tracking overall demand declined to its lowest level since August 2020.

“Survey participants indicated that demand growth was constrained by the escalation of the Covid-19 pandemic, while the rise in input buying was curtailed by an intensification of cost pressures,” said Pollyanna De Lima, economics associate director at IHS Markit.

Maharashtra became the first state to announce localised curbs in the wake of rising Covid-19 cases. Now, many Indian states have followed suit.

The restrictions have come as a rude shock to some service-oriented companies engaged in travel, tourism and hospitality businesses.

Restaurants, hotels and similar establishments faced the biggest losses during the first wave of the pandemic and had barely recovered. The fresh curbs could be a death knell for many such businesses. As a result, millions of employees and workers could lose jobs or face salary cuts again.

Also Read | Explained: How fresh Covid curbs may be a death knell for hospitality sector

Several restaurant associations have already asked respective state governments to either ease curbs or support them as many small establishments will cease to exist in the absence of both.

The lockdown-like curbs could have a similar impact on the travel and tourism sector as well. This will severely impact the economies of tourism-dependent states in the country.

It may be noted that the travel and tourism sector contributes nearly 7 per cent of India’s GDP. In 2019, the combined sector contributed $194 billion to the country’s GDP. While the sector was hoping to get back on its feet in FY22, the country’s rising Covid-19 trajectory seems to have spoiled recovery plans.

Job losses in the travel and tourism sector will rise sharply if the Covid-19 restrictions continue for a longer period. Many migrant labourers engaged in the sector are already moving back to their home towns, fearing that they will again be stranded without an income. 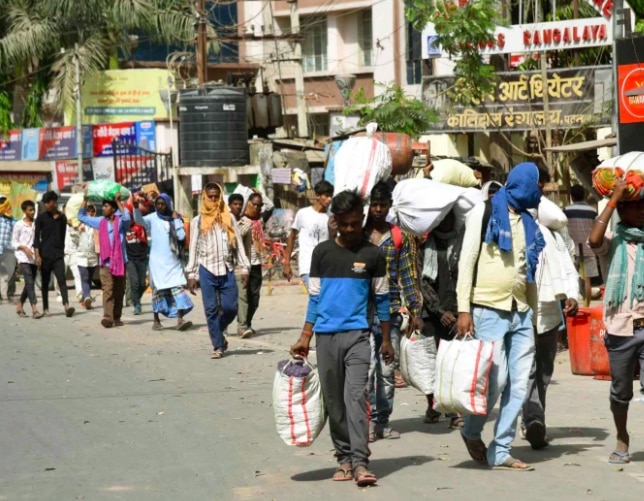 Migrant labourers in many states are heading home after lockdown-like restrictions were imposed to curb the second Covid-19 wave. (Photo: India Today)

While travel, tourism and hospitality will be the first ones to feel the heat of prolonged Covid-19 restrictions, other important sectors like trade, construction, real estate and retail will start facing losses if the situation does not improve within the first quarter.

The loss to the economy, as a result, could be catastrophic, given the fact that neither banks nor the government may be able to match the relief measures announced last year during the first wave.

The first wave of Covid-19 in India ravaged the economy, but the shock was absorbed to a great extent by relief measures announced by the government and Reserve Bank of India.

The government had announced a series of relief measures under the Aatmanirbhar Bharat package for limiting the damage to the economy. The Reserve Bank of India also announced a slew of measures to shield individuals and companies amid the crisis. The loan moratorium extended to borrowers was one such measure.

This time, however, the relief measures may not be so broad-based. Government revenues are already strained after last year’s generous efforts, while banks are in a much weaker position to extend any financial help to borrowers.

Therefore, relief measures may not be enough to support the economy if the second wave aggravates. The only option that may be available to the government is additional borrowing, but that will come at the cost of stretching the fiscal deficit further.

There is no way to sum it up without saying that the situation in India is critical at the moment — both in terms of healthcare and economic resilience.

The rising daily caseload may result in stricter curbs across several states soon and businesses may not be able to withstand the same amount of pressure for the second time in less than two years.

The risk is much greater this time as India’s economy lost a chunk of its immunity to the virus in the first wave. Surviving a deadlier second wave will be difficult if it continues for a prolonged period.