Several houses and buildings were damaged after an earthquake of magnitude 6.4 on the Richter scale hit Assam around 8 am on Wednesday. Six aftershocks, of magnitude ranging from 3.2 to 4.7, occurred in the two-and-a-half hours following the main tremor.

Senior Minister Himanta Biswa Sarma posted on Twitter that the epicentre was in Dhekiajuli town in the state’s Sonitpur district. Prime Minister Narendra Modi spoke to Chief Minister Sarbananda Sonowal and assured all help from the Centre.

On a fault line…

The primary earthquake had its epicentre at latitude 26.690 N and longitude 92.360 E, about 80 km northeast of Guwahati, and a focal depth of 17 km, the National Centre for Seismology (NCS) said.

“The preliminary analysis shows that the events are located near to Kopili Fault closer to Himalayan Frontal Thrust (HFT). The area is seismically very active falling in the highest Seismic Hazard zone V associated with collisional tectonics where Indian plate sub-ducts beneath the Eurasian Plate,” the NCS report said.

HFT, also known as the Main Frontal Thrust (MFT), is a geological fault along the boundary of the Indian and Eurasian tectonic plates. The Kopili Fault is a 300-km northwest-southeast trending fault from the Bhutan Himalaya to the Burmese arc. 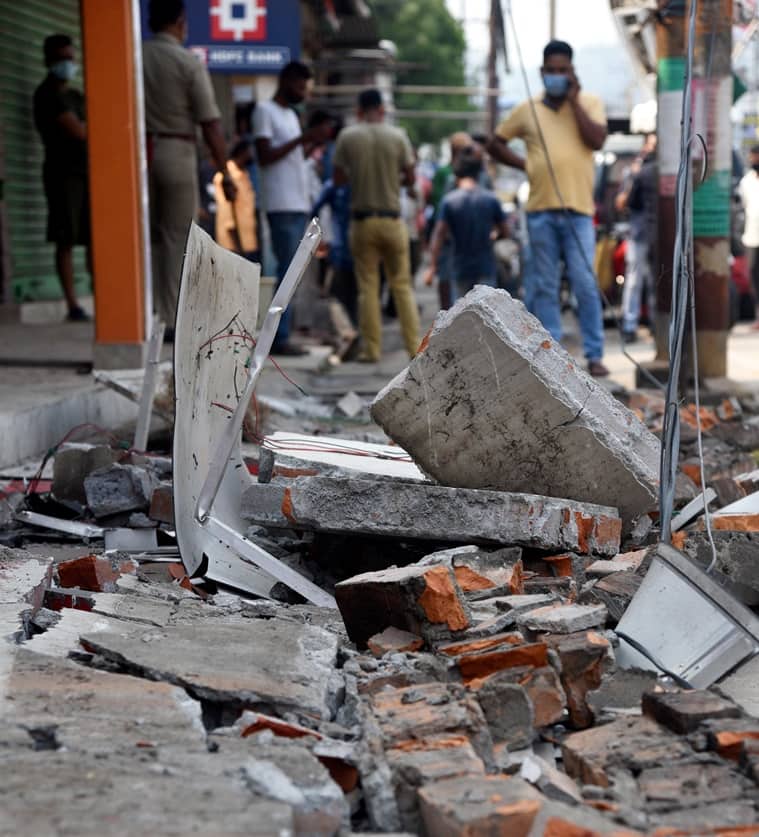 People look on at debris after a portion of few shops were damaged due to earthquake at Bhetapara in Guwahati, Wednesday, April 28, 2021. (PTI Photo)

The United States Geological Survey (USGS), a scientific agency of the US federal government, defines a fault as “a fracture along which the blocks of crust on either side have moved relative to one another parallel to the fracture”.

According to the USGS, “When an earthquake occurs on one of these faults, the rock on one side of the fault slips with respect to the other. The fault surface can be vertical, horizontal, or at some angle to the surface of the earth.”

Prof Chandan Mahanta of the Department of Civil Engineering at the Indian Institute of Technology, Guwahati, said: “The Northeast is located in the highest seismological zone, so we must have constant earthquake preparedness at all levels. Continuous tectonic stress keeps building up particularly along the faultlines. Today’s earthquake was an instance of accumulated stress release — probably, stress was constrained for a fairly long time at this epicentre, and hence the release was of relatively higher intensity.”

Prof Mahanta said the timing of the earthquake and its duration ensured the damage was restricted. “The earthquake occurred early in the day when people were mostly home. Had it happened during working hours, say when there were workers at under-construction high-rise buildings, the earthquake might have taken lives,” he said.

“The duration is also important,” Prof Mahanta said. “Had the main tremor continued for more than 30 seconds with the same intensity, the resultant acceleration and resonance could have cause greater damage to structures.”

The NCS report said “historical and instrumentally recorded earthquake data” show the region has seen several “moderate to large earthquakes”. The worst of these was the great Assam-Tibet Earthquake that occurred on Independence Day in 1950.

“The Assam quake…stands out amongst the biggest temblors which have shaken our planet,” says a piece on the UC Berkeley Seismology Lab blog. The tremors were “so strong that it caused huge landslides which in turn blocked many rivers in the mountainous region”, it says.

The earthquake “had a moment magnitude of 8.6 and hence was in the same league as the Great Chile Earthquake, with its magnitude of 9.5, ten years later or the Tohoku-oki quake off the coast of Honshu in 2011, for which the magnitude was determined to be 9.0”.

The piece concluded, “No matter what the mechanism, there is one item all seismologists agree upon: The collision zone between India and Eurasia along the tremendous Himalayan mountain range has one of the highest seismic hazards in the world.”

The abstract of a scientific paper on the quake in the journal Nature recorded, “The great Assam earthquake of 12 June 1897 reduced to rubble all masonry buildings within a region of northeastern India roughly the size of England, and was felt over an area exceeding that of the great 1755 Lisbon earthquake.”

A 2015 paper by O Baro and A Kumar of IIT-Guwahati noted about the 1897 earthquake: “The shaking due to this earthquake was felt at several places across the Indian subcontinent. Large fissures of 18 to 30 m ran parallel to the banks of the Brahmaputra River and its various tributaries.”