Last week, the Kerala cabinet gave the green light to begin acquiring land for SilverLine, its flagship semi high-speed railway project aimed at reducing travel time between the state’s northern and southern ends. The project, estimated to cost Rs 63,940 crores, is billed as one of the biggest infrastructure enterprises being pushed by the ruling Left Democratic Front (LDF) government.

What is the SilverLine project?

The project entails building a semi high-speed railway corridor through the state linking its southern end and state capital Thiruvananthapuram with its northern end of Kasaragod. The line is proposed to be 529.45 kms long, covering 11 districts through 11 stations. When the project is realised, one can travel from Kasaragod to Thiruvananthapuram in less than four hours on trains travelling at 200 km/hr. The current travel time on the existing Indian Railways network is 12 hours. The deadline for the project, being executed by the Kerala Rail Development Corporation Limited (KRDCL), is 2025. KRDCL, or K-Rail, is a joint venture between the Kerala government and the Union Ministry of Railways.

During a review meeting of the project in Janauary 2020. (Source: keralarail.com)

What was the need for the project?

It has long been argued by urban policy experts that the existing railway infrastructure in the state cannot meet the demands of the future. Most trains run with an average speed of 45 km/hr due to a lot of curves and bends on the existing stretch. The government claims the SilverLine project is the need of the hour as it can take a significant load of traffic off the existing railway stretch and make travel easier and faster for commuters. This will in turn reduce the congestion on roads and help reduce accidents and fatalities.

What are the features of the project?

According to K-Rail, the project will have trains of electric multiple unit (EMU) type with preferably nine cars and extendable to 12 cars each. A nine-car rake can seat a maximum of 675 passengers in business and standard class settings. The trains can run at a maximum speed of 220 kmph on standard gauge track, completing journeys in either direction in under four hours. A total of 11 stations are proposed including the two terminals, three of which will be elevated, one underground and the rest at grade. Every 500 metres of the corridor, there will be under passages with provision of service roads. 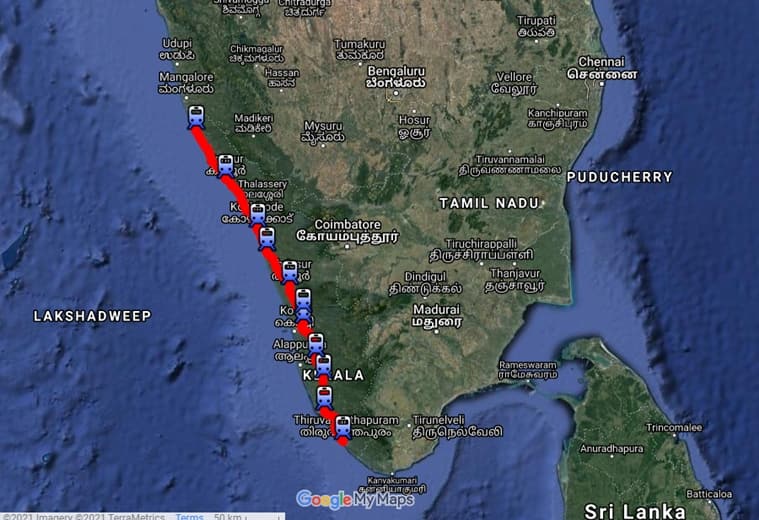 The government claims the railway line will reduce greenhouse gas emissions, help in expansion of Ro-Ro services, produce employment opportunities, integrate airports and IT corridors and faster development of cities it passes through.

What’s the present alignment of the railway project?

The alignment, as per the detailed project report (DPR) of the government, has been published by K-Rail. The railway line, beginning from Thiruvananthapuram, will have stations in Kollam, Chengannur, Kottayam, Ernakulam (Kakkanad), Cochin Airport, Thrissur, Tirur, Kozhikode, Kannur and culminating in Kasaragod. The proposed station at Kozhikode will be underground, those at Thiruvananthapuram, Ernakulam and Thrissur elevated and the rest at-grade. The Cochin International Airport Limited (CIAL) has already offered 1 acres for the station there.

What’s the present status of the SilverLine project?

The ambitious project has got a fillip with the state cabinet formally giving the nod for land acquisition. A total of 1,383 hectares are needed to be acquired out of which 1,198 hectares will be private land. Administrative sanction to get Rs 2,100 crores from Kerala Infrastructure Investment Fund Board (KIIFB), the central investment arm of the government, has also been given the nod by the cabinet.

In June last year, the state government had approved the DPR with a minor change. The Centre has given an in-principle approval for the project. The railway line is expected to be constructed using equity funds from Kerala government, Centre and loans from multilateral lending agencies.

Can the project be completed on time?

The unofficial deadline for the project is 2025 but many would say it’s not a realistic target, given the laborious nature of land acquisition in a highly densely-populated state like Kerala. Acquiring land, especially from private players, in urban areas remains the key challenge for the project. There’s also significant opposition to the project by environmentalists citing potential damage to the state’s ecosystem in the path of the proposed route. They fear irreversible impact to the state’s rivers, paddy fields and wetlands, triggering floods and landslides in future. The Kerala Paristhithi Aikya Vedi, a forum of eco-experts and activists, has called on the government to abandon the project and explore sustainable solutions. Hence, the pace of the project would hinge on the government’s ability to assuage these concerns and speed up acquisition of land.