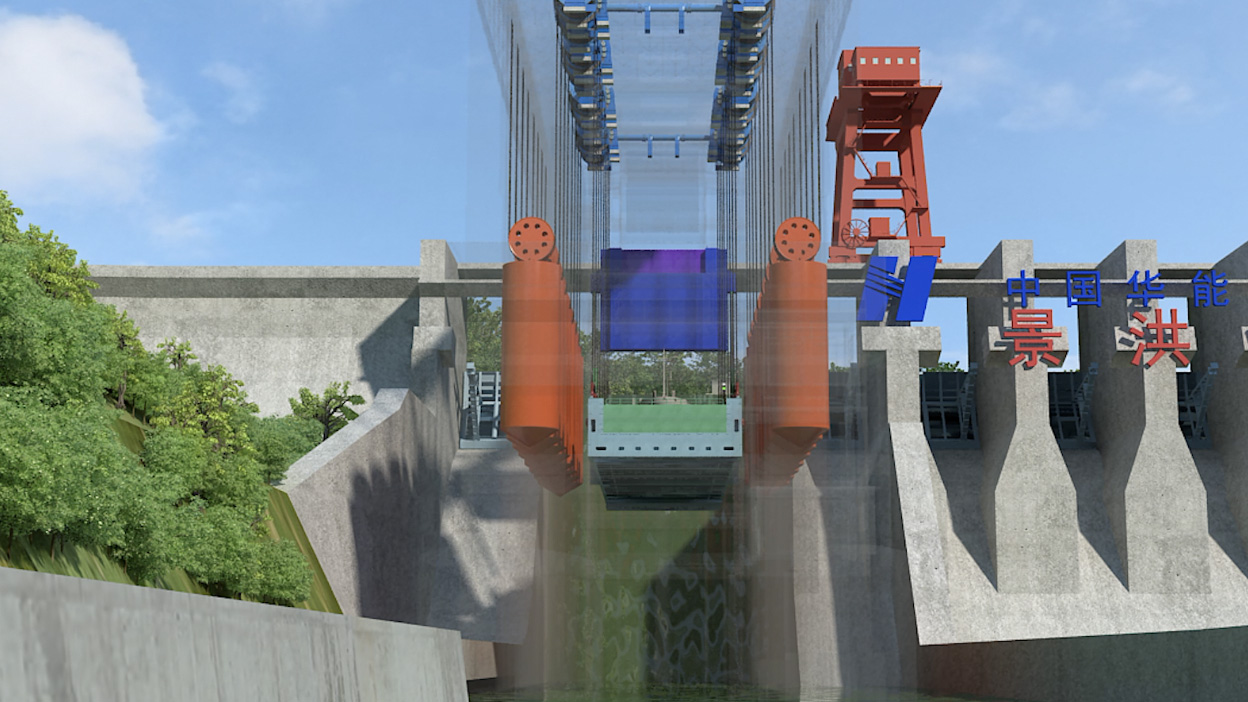 The hydraulic ship lift at Jinghong Hydropower Station is an engineering marvel that allows boats to travel upstream and downstream in minutes.

At Jinghong Hydropower Station, the difference in height between upstream and downstream is about 67 meters. Ships have to travel through the hydropower station to get to Simao Port, a major hub for international trade along the Lancang River in southwest China’s Yunnan Province.

Jinghong’s main purpose is to generate hydroelectric power and provide ship lift services for vessels in the river. It is the first of its kind in the world designed by Chinese engineers and has also been granted a patent in the U.S.

China shares a major waterway with its neighbors in Southeast Asia – the Lancang River, which becomes the Mekong River, running through the Laos, Myanmar, Thailand, Cambodia, and Vietnam.

The station, located in Xishuangbanna Dai Autonomous Prefecture, Yunnan Province, has a total installed capacity of 1,750 MW, with an annual power generation capacity of 7.858 billion kWh. It is the last Chinese dam before the river heads to the Mekong basin countries.

The ship lift entered operation in 2016, and a complete lift operation requires only about 17 minutes.

An animation shot of how the ship lift operates. /Jinghong Hydropower Station

An animation shot of how the ship lift operates. /Jinghong Hydropower Station

The 300-tonne structure has the maximum capacity to carry up to 500 tonnes.

“We generate electricity, but we also need to operate the hydraulic ship lift. The plant is the first of its kind in operation that covers both daily operation and maintenance of generating electricity and providing a lift service for ships,” said Guo Jinzhong, director of the Operation and Maintenance Department at the station.

Existing ship lifts fall into two categories: electrical or hydraulic. Each comes with its pros and cons. Hydropower stations will choose what to use depending on the size of the canal and the traffic volume. The hydraulic system was chosen for Jinghong for its simplicity, low costs and accessibility of parts.

Huang Qun, director of the station’s Engineering Department, is the designer of the ship lift. “Our structure is relatively simple. The principle of its operation is straightforward. The loaded equipment and components are easy to find. It does not require that many accessories such as the power engine and decelerator. It doesn’t need a power system,” said Huang.

When a ship needs to go downstream or upstream, the hydraulic ship lift adjusts the difference using the water volume. To be more specific, it uses the water level difference between the upstream and downstream to charge and discharge water to the shaft, so that it changes the balancing weight and buoyancy to drive the cabin to move up and down

Traditional lifts, also known as the electrical ones, adjust the weight and balance via electricity and engine power.

An animation explaining the operation of hydrodynamic applied on the ship lift. /Jinghong Hydropower Station

An animation explaining the operation of hydrodynamic applied on the ship lift. /Jinghong Hydropower Station

Speaking of future development, Huang said it is to expand the capability to handle heavier ships with current limitations, adding “That is one aspect of it. The others are to increase the height at which the lift can be raised and the new challenge of hydrodynamics.”

The lift service is free of charge since the station is a key point to get to Simao Port. The structure was used 245 times since going into operation.

Liang Guofeng, monitor of the Reservoir Department at the station, is in charge of arranging the lift schedule. According to his explanation, after receiving requests from companies and organizations, the staff on duty will do a thorough examination of the vessel and grant a permit if it is the first time. The permit can be applied for future use.

When it is good to go, Liang’s office will confirm the time slots with those who send in the request.

“We have the capability to handle both domestic and international vessels’ travel. So far, we have only received requests from domestic vessels,” Liang shared.

This year marks the fifth anniversary of the Lancang-Mekong Water Resources Cooperation. The team hopes the ship lift can provide safe and convenient shipping channels for domestic and overseas vessels and contribute to the social and economic development of the region.