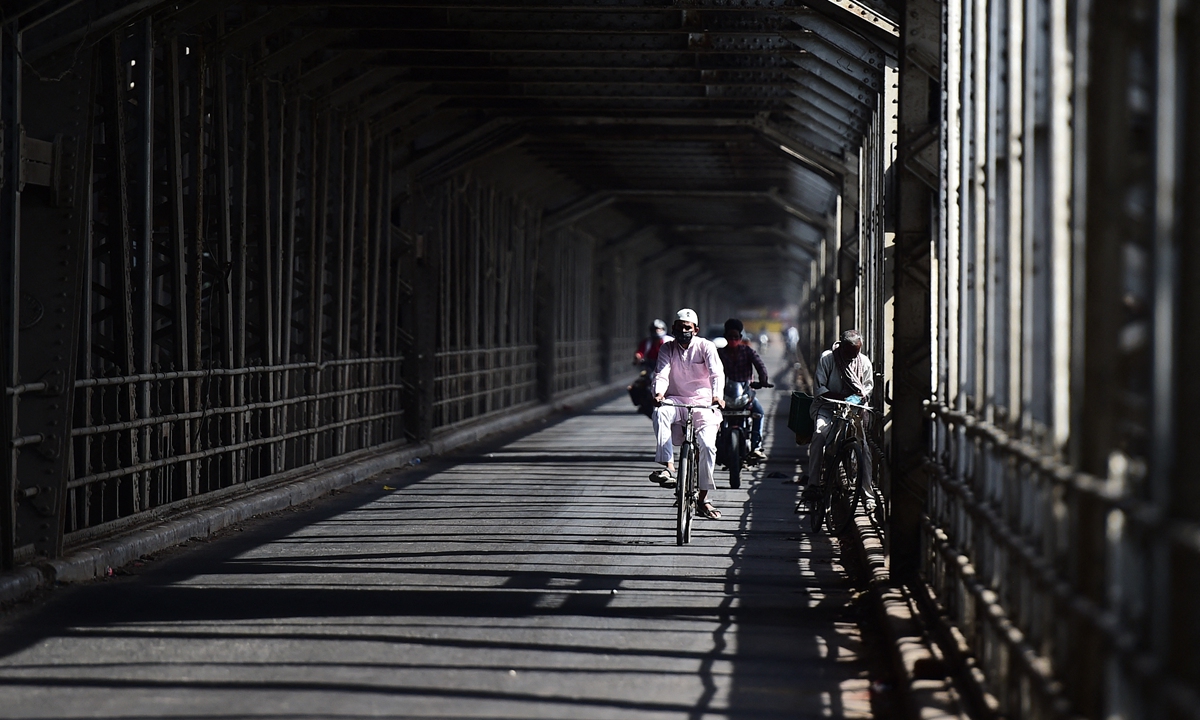 A man rides a bicycle on an empty bridge during a weekend lockdown imposed by the government as a preventive measure against the COVID-19 epidemic in Allahabad, India, on April 18. Photo: AFP

As India suffers its worst humanitarian crisis amid the devastating second wave of COVID-19 with the fastest rise in new daily cases any country has experienced since the outbreak, the Chinese government and enterprises have made goodwill gestures by offering help or donating medical supplies despite sour bilateral ties.

Chinese analysts, who project India’s daily new cases may surge to 500,000 in two weeks, called on India to put aside political biases to learn from China in improving testing ability and building makeshift hospitals.

India has been breaking the record of the world’s highest daily surge in the past days with more than 340,000 new cases and 2,624 deaths reported in the past 24 hours.

A shortage of medical oxygen, hospital beds and other necessary drugs continued to plague more hospitals in India on Saturday. Several hospitals either stopped admitting new patients due to no oxygen or posting SOS messages for help.

Moolchand Hospital in New Delhi tweeted on Saturday, “Urgent SOS help. We have less than 2 hours of oxygen supply.”

Chinese analysts predicted daily new cases in India may peak at 500,000 in the next two weeks, and it needs at least a month optimistically for India to control the second wave. The real numbers are much higher than recorded as many homeless people infected with the virus have not been included, analysts said.

While expressing sympathies to India, the Chinese Foreign Ministry for two consecutive days this week said China is ready to provide support and help according to India’s needs, and China is in communication with India on this, a good gesture that Chinese analysts said was the  “friendliest signal”  China has sent to India recently.

Donations from Chinese companies are also on the way.

With demand for medical oxygen cylinders skyrocketing in India, Chinese smartphone maker Xiaomi on Thursday announced it will donate INR 3 Crores to procure more than 1,000 oxygen concentrators for hospitals across India.

The Global Times learned from a source close to the matter on Saturday that a Chinese logistics company plans to donate 300,000 KN95 face masks to India, and the source is contacting recipients in India. A Chinese motorcycle company has donated more than 200,000 masks to a hospital in Delhi, and a Chinese company in the textile industry has purchased a ventilator in China and is sending it to a hospital in India.

Wang Guangfa, a respiratory expert at Peking University First Hospital who shared China’s epidemic control and prevention experience with many countries including India last year, told the Global Times on Saturday that with a large population, India’s priority is to learn from China on strict prevention and control measures, including improving its testing ability to find more patients, and building field hospitals to quarantine and treat patients.

Wang said that these measures could effectively control the source of infection and cut the virus transmission route as China’s experience showed that many patients were detected from testing.

A Chinese merchant in India told the Global Times on condition of anonymity that he’s concerned Indian government may be reluctant to receive Chinese donations and help, and even if accepted, Indian politicians would not stop fanning the flames of anti-China sentiment for their political gain.

He said that Indian residents did not show any hatred toward Chinese in India, but it’s those Indian politicians and media who incite nationalism.

India wants to move closer with Western countries led by the US. But Western countries are busy canceling diplomatic exchanges and suspending flights from India, and the US did not lift its restrictions of exports of vaccine raw materials that India urgently needs, Hu said.