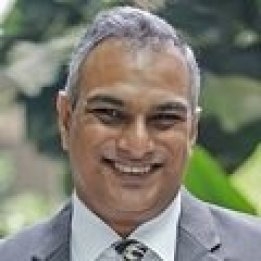 Research body the Singapore Maritime Institute has set out the challenges facing the city-state’s bunker industry as it enters the alternative fuels era.

Dr Sanjay Kuttan, the institute’s executive director, highlighted what may be big shifts in global bunker demand in an interview with Ship & Bunker this week.

“I think the whole bunkering world is going to change because of alternative fuels,” Kuttan said.

Singapore cannot hope to be everything to everyone.

“Different solutions will come into play, depending on what’s available to the port at a cost-effective rate that makes commercial sense, and the kind of vessels that the shipowners decide to own.

“You’re going to have a multi-fuel scenario.

“In some fuels Singapore may be biggest, but in others it may be the smallest.

“Singapore cannot hope to be everything to everyone.”

Singapore has long been the world’s largest bunkering hub, with annual sales of almost 50 million mt last year. But in recent years smaller bunker markets in Europe have made faster inroads into the alternative fuels space, partly as a result of local subsidies, particularly in the case of LNG bunkering.

That could be about to change, with an uptick in LNG bunker demand in Singapore expected this year.

The city-state awarded its third LNG bunker supplier licence to Total in February, after handing out the first two to FueLNG and Pavilion Energy in 2016. Last month Singapore also saw its first LNG bunkering of a large container ship — a key development in bringing about critical mass in gas bunker demand.

There’s definitely a sense that there would be an uptake [of LNG bunkering].

“There’s definitely a sense that there would be an uptake [of LNG bunkering], and therefore preparation for that uptake,” Kuttan said.

“MPA is working very closely with the shipping companies that are coming to the port and burning LNG.”

One development that would help assess the prospects of LNG bunker supply in Singapore would be to add data on LNG to the Maritime and Port Authority‘s (MPA) monthly figures on bunker sales. Kuttan said he was not aware of any current plans to do so, but said it would make sense over the longer term as demand picks up.

Biofuels are another alternative marine energy source that have picked up quickly in Europe in recent years. Local producers have been explicit in stating that subsidies were the key element in making this happen.

Kuttan said Singapore may consider similar support for biofuels, but argued the government should not be the sole contributor to making the supply chain for these fuels profitable.

I don’t think soon would be the right word.

“I don’t think soon would be the right word, but it’s definitely something to consider in the future.”

The Singapore Maritime Institute is currently working with the MPA on the possibility of electrifying the port’s harbour craft, putting out a call for proposals in September.

Kuttan is due to present information about the initiative at the Singapore Maritime Technology Conference 2021 next week.

Anywhere from two years to four years from award, we should see fully electric vessels operating in the water on a commercial basis.

“We’re going through the process of whittling down the 16 applicants to basically two to three projects, where they would design, build and operate electrified harbour craft for commercial purposes,” Kuttan said.

“The plan is that they would also test the business model that would allow it to scale on its own.

“Most projects we’re looking at have a three-year timeline, and some have five.

“So we anticipate that anywhere from two years to four years from award we should see fully electric vessels operating in the water on a commercial basis.”

Kuttan hopes the projects will be able to secure low-cost funding from banks that have adopted the Poseidon Principles.

A wider rollout of electrification may follow in the coming years, depending on the MPA’s decarbonisation goals.

“My guess is that MPA doesn’t want to hamstring the ecosystem by forcing them to do something which is not profitable and will not give them you the decarbonisation bang for their your buck,” he said.

“They are also learning from this pilot to understand what are the real possibilities and how feasible it is to electrify the harbour craft ecosystem.”

A major part of the decarbonisation strategy the MPA sets will be determining whether to follow other national and regional authorities in imposing a form of carbon tax.

The European Union is widely expected to bring shipping into its emissions trading system in the coming years, and the UK and China have expressed interest in making similar moves. The system will impose costs on the shipping industry for its emissions, and may use some of the revenue raised to subsidise zero-carbon fuels.

My sense is that the motivation here is to encourage decarbonisation, and not collect revenue.

“I think the Singapore maritime authority will definitely keep a watching brief on it,” Kuttan said.

“Singapore is part of the Port Authority Roundtable, and I’m sure as a collective, they may or may not decide to level the playing field, so to say.

“My sense is that the motivation here is to encourage decarbonisation, and not collect revenue as the main consideration.

“If by raising the taxes, it shifts the needle on decarbonisation, then that could be a possible decision that would be taken.”

Jack Jordan is the Managing Editor of Ship & Bunker, the world’s most read marine fuel-focused publication.

He is an experienced financial editor and reporter with a first-class degree in Arabic and Russian, a postgraduate diploma in newspaper journalism and several years’ history of covering the oil and shipping industries and capital markets.

Jack is based in London, UK.

To contact the editor responsible for this story email us at editor@shipandbunker.com