Hyderabad: Telangana has emerged as one of the eight States in the country to have achieved cent per cent electrification of households. As per the India Residential Energy Survey 2020 conducted by the Council of Energy, Environment and Water, majority of the respondents (consumers) were satisfied with the power supply and its quality in the State.

One of the government’s flagship programmes is to provide 24 hours of uninterrupted power supply to all consumer categories, including the agriculture sector. Agriculture connections in the State have been receiving uninterrupted and free power supply since 2018. This has boosted agricultural production and improved farmers’ incomes.

To meet the growing demand and provide universal access to electricity, the contracted capacity has been significantly increased. In 2014, the overall power generation capacity of the State was 7,778 MW. Since then, this has nearly doubled. In 2019-20, the total contracted capacity in the State stood at 15,864 MW (including State, Central and private sector shares).

Telangana State Power Generation Corporation Limited (TSGENCO) is the largest contributor to electricity generation in the State. Keeping in view the growing demand for power in the State, TSGENCO has undertaken a capacity addition programme by establishing two new thermal power projects of 5,080 MW. The new projects are Bhadradri Thermal Power Station (4×270 MW), which has been commissioned, and Yadadri Thermal Power Station (5×800 MW), which is planned to be commissioned in the next two to three years. 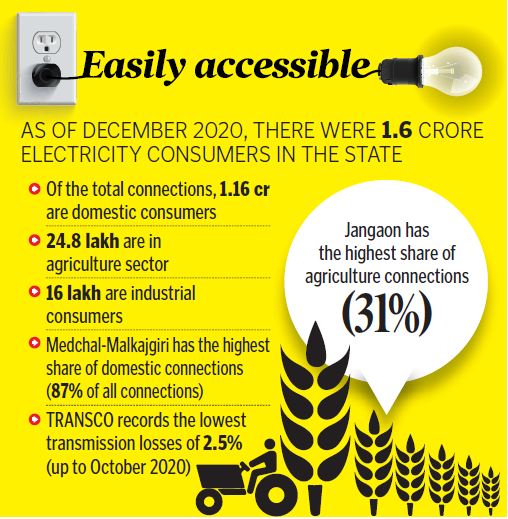 The report said in terms of sources of electricity generation, thermal continues to make up more than half of the total installed capacity because of the availability of abundant coal in the State. In addition to thermal power, the share of renewables such as solar power and biomass is also increasing. The total installed capacity of renewable energy, including solar, stood at 3,944 MW in 2019-20.

Now you can get handpicked stories from Telangana Today on Telegram everyday. Click the link to subscribe.