The Valencia Containerised Freight Index (VCFI) increased by 17.48% in March -

The Valencia Containerised Freight Index (VCFI) increased by 17.48% in March


The Valencia Containerised Freight Index (VCFI) recorded an increase of 17.48% in March compared to the previous month and stands at 1.991,96 points, the highest figure since the beginning of the historical series in January 2018. The growth in freight rates occurs in all geographical areas analysed by the VCFI except in two (Atlantic Europe and Baltic countries). Fuel prices, congestion on the main routes in the East and West, the shortage of empty containers and the forecast of strong cargo demand for maritime traffic in the coming months are factors that have influenced the growth of the index. 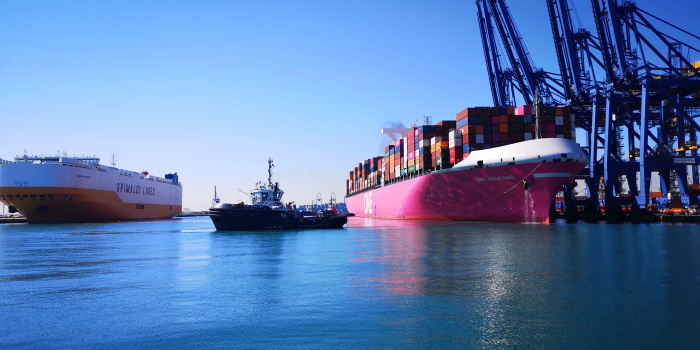 On the demand side, since December 2020, global port traffic growth seems to have stabilised and in February it remained at almost the same levels as in the previous month, according to the latest data published by RWI/ISL, which is produced by the Leibniz Institute for Economic Research. However, if we take the latest data from Valenciaport as a reference, we can observe a strength in the demand for export traffic (full containers) which experienced strong growth in February compared to January and are at much higher levels than in the same period of the previous year.

On the supply side, the idle fleet stood at 2.6% in mid-March, while the commercially idle fleet reached 1.1%. According to Alphaliner, this is in line with shipping operators’ forecasts of strong cargo demand in the coming months, particularly in the run-up to the upcoming summer peak season. Shipping lines also expect the current problems of port congestion on the main East and West trades to persist into the summer months, which will further expand the already tight capacity supply and contribute to keeping the idle fleet at low levels.

Another determinant of freight fluctuations is the price of oil. In March, the average value of a barrel of European Brent crude oil stood at 65.41 dollars per unit, 5.03% higher than the previous month, continuing the upward trend of recent months. Bunkering prices (refuelling of ships at sea) in March have shown a mixed performance. Thus, in the first half of the month, the cost of IFO 380 (Intermediate Fuel Oil) and VLSFO (Very Low Sulphur Fuel Oil) continued to rise, while in the second half of the month prices fell slightly. 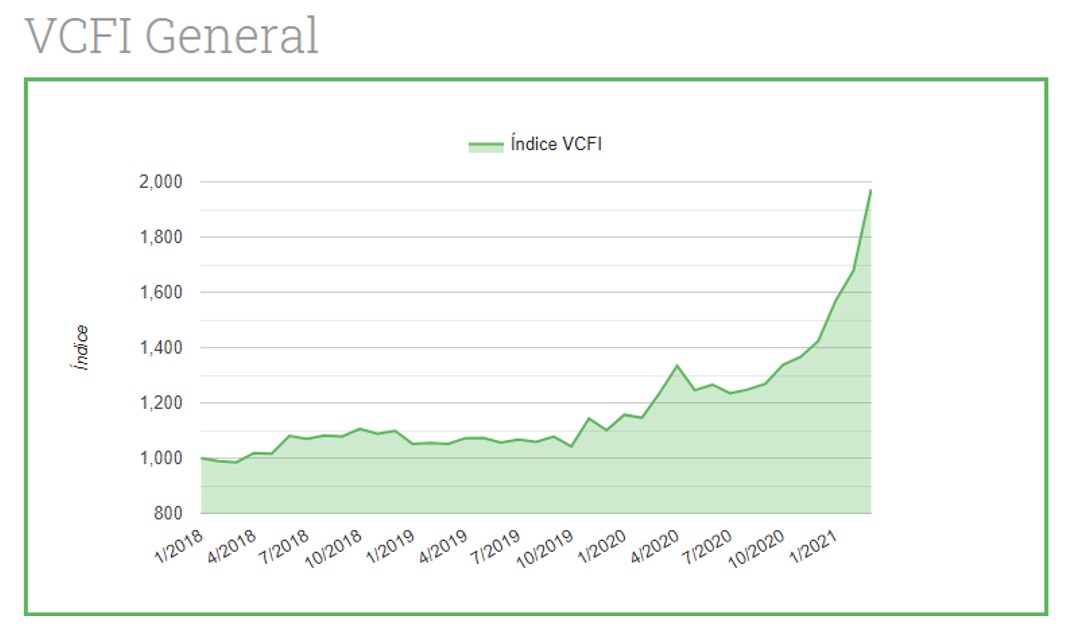 In terms of geographical areas, growth in Latin America Pacific (45.68%), Central America and the Caribbean (40.08%), the United States and Canada (23.17%) and the Eastern Mediterranean (14.99%) were particularly noteworthy. According to the latest traffic data from Valenciaport, export containers to these areas have experienced strong growth in February (latest available data), which may be pushing freight rates up with these areas. To this must be added the continuing shortage of containers and congestion on some routes.

In this respect, the case of the United States should be noted, where stagnation problems persist in some of its main ports, causing negative effects on import chains. In addition, it should be added that spending on goods has experienced positive growth since June 2020, this being the driving force behind the boom in demand. An increase that continues in 2021, which makes it likely that the increase in demand for goods in the US will accelerate, which will continue to pose a challenge for import logistics chains.

The Western Mediterranean sub-index rose again by 19.74% to 1,459.51 points. This makes four consecutive months of strong increases, accumulating 45.95% since the beginning of the series in January 2018. It should be noted that the performance of exports from Valenciaport to these markets continues to be positive, although in the last month it was more moderate. On the other hand, the global context of a shortage of empty containers and the difficulty in finding slots on ships continue to be the prevailing trend, which may be having a major influence on freight rates with this area. 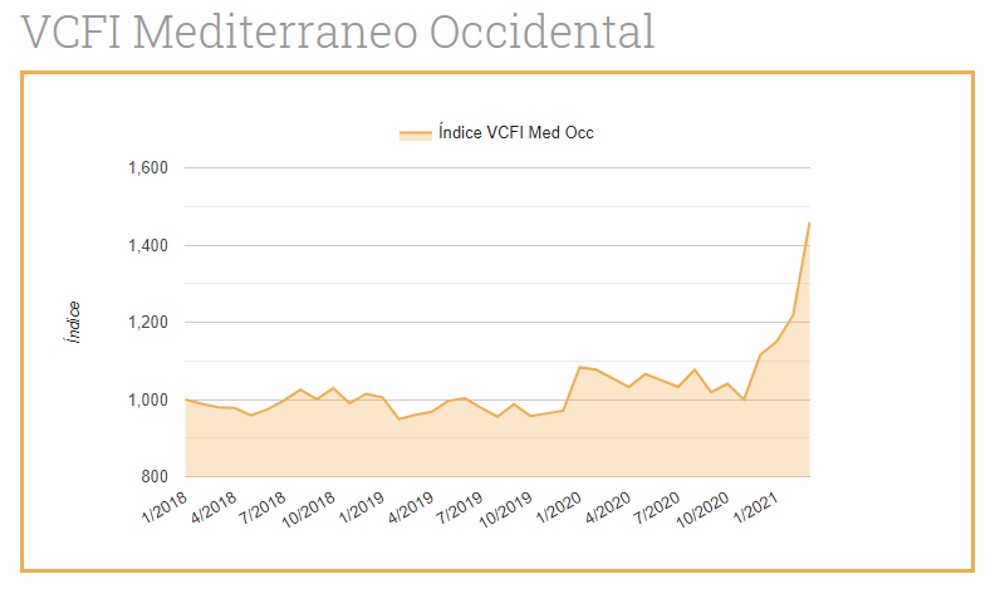 As for the Far East sub-index, in March it again experienced strong growth of 8.05% and has now risen for eight consecutive months, standing at 3,180.31 points. Beyond the global problems in the maritime transport market, which seem to be affecting most areas, it should also be noted that export traffic from Valenciaport to the markets belonging to this area grew strongly in February. Thus, this increased demand may also be putting pressure on freight rates to these destinations. 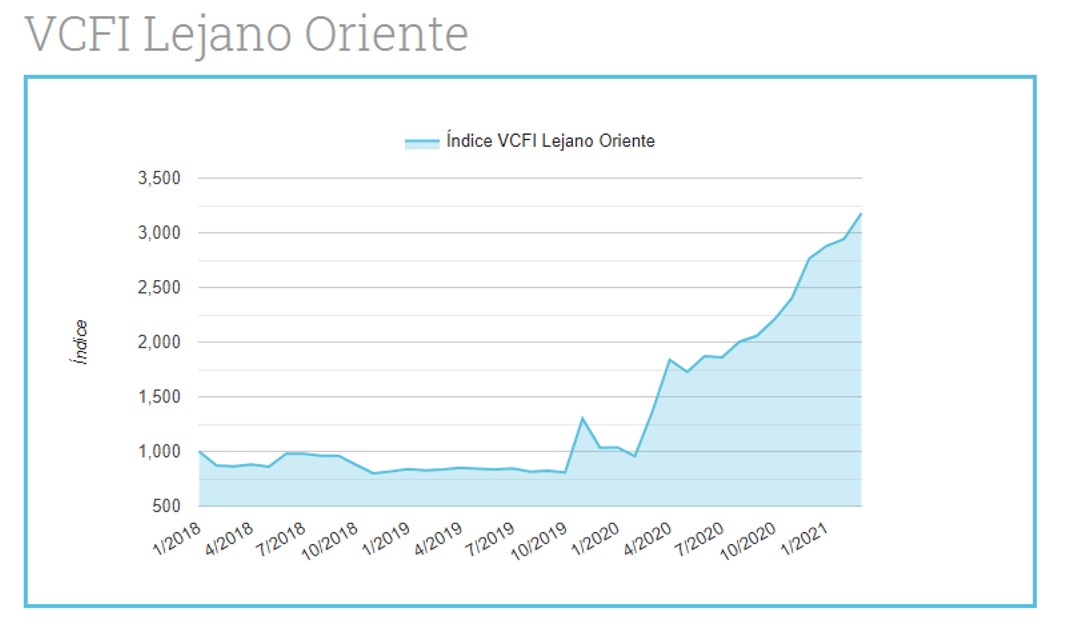