Nothing seems to be going right for Cyrus Pallonji Mistry, 52, the former chairman of Tata Sons and scion of the Shapoorji Pallonji (SP) Group. On March 26 this year, the Supreme Court upheld his ouster as chairman of the Tata Group in October 2016, barely three years after he had succeeded Ratan Tata at the helm of one of India’s largest private sector conglomerates. This could mark the beginning of the end of the Mistry family’s storied association with the Tatas, an 84-year-old affair that began with Shapoorji Pallonji buying a 12.5 per cent stake in Tata Sons from the heirs of financier F.E. Dinshaw in 1936. The significance of this development is not just pecuniary; the business families were so close that Cyrus’s father, Pallonji Mistry, was once described as the ‘Phantom of Bombay House’ (the headquarters of the Tata Group) for the quiet influence he wielded over the Tata business empire. The apex court’s judgment ends a three-plus-year battle between Cyrus Mistry, whose family, the largest shareholder in Tata Sons after Tata Trusts, owns an 18.4 per cent stake in the firm, and the Tata Group. After being ousted from the board of Tata Sons, Mistry was subsequently removed from individual company boards as well, a process that also saw the exit of supporters like Nusli Wadia, chairman of the Wadia Group, from Tata Group companies. 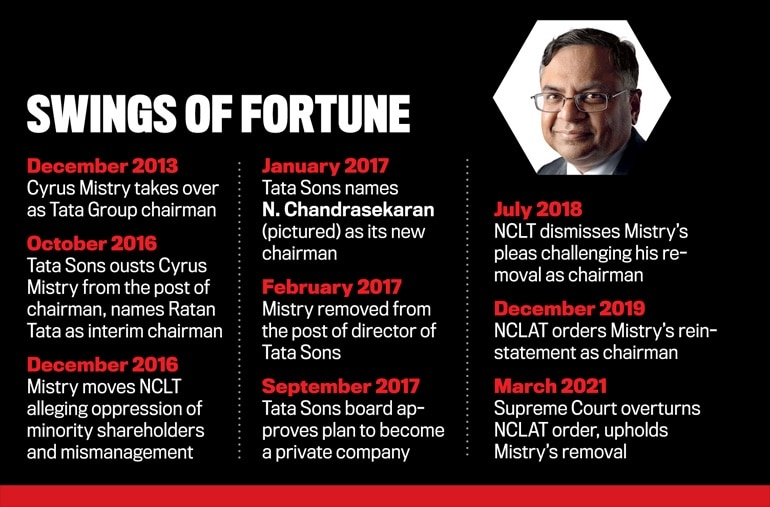 Now that the case has been closed in favour of the Tatas, the focus is on the way forward. Since it is abundantly clear that the relationship between the Tata and Mistry families has reached a nadir, it is likely only a matter of time before the two part ways, with the Mistrys selling their stake in Tata Sons to the Tatas, who have the right of first refusal. This may prove essential, the SP Group is battling mounting debt, with its core businesses in engineering, construction and real estate having suffered during the pandemic. It has approached lenders for a one-time debt-restructuring exercise. According to ratings agency ICRA, the total debt repayment obligation in 2020-21 of Shapoorji Pallonji and Company (SPC), the flagship of the 150-year-old SP Group, is about

Even before the SC verdict was pronounced, the Mistrys had complained that they were not being allowed to pledge their shares to raise capital. The SP Group had pledged half of its 18.4 per cent stake in Tata Sons to Axis Bank and IDBI Bank for Rs 5,074 crore. However, Tata Sons moved the Supreme Court, restraining the SP Group from pledging further shares, even as the SP Group was reportedly in talks with Toronto-based Brookfield Asset Management to raise another Rs 3,750 crore. Pledging their stake in Tata Sons had never been the first option for the Mistrys. Over the past two years, SPC has pledged shares in operating firms such as Forbes & Company, Sterling & Wilson, Afcons Infrastructure and Sterling & Wilson Solar, and had also approached various lenders for capital. Reports say that the first sign of trouble came when the promoters failed to repay dues to group company Sterling & Wilson Solar in June last year.

The manner in which the SP Group, which was one of India’s foremost engineering and construction companies, has become steeped in debt forcing it into a debt-restructuring exercise is a classic case of the dipping fortunes of Indian businessmen and their highly leveraged companies. Driven by cheap debt, a host of engineering, infrastructure and real estate firms in India pla­nned massive expansions over the past few years, only to see many projects run aground as the economy slowed down and the Covid-19 lockdown and subsequent restrictions throttled businesses further.

In October 2020, ICRA downgraded SPC on account of its constrained finances after the apex court put a stay order on its pledging of Tata Sons shares to raise capital. The downgrade also reflects the impact of Covid-19 on the construction and real estate sectors. In its report, ICRA said SPC missed its repayment obligations due to its weak finances.

While the promoters have infused close to Rs 3,875 crore in SPC in FY2020, including about Rs 1,900 crore from Sterling & Wilson Solar’s initial public offering, that money was deployed to meet the funding requirements of several group companies. In the previous fiscal until October, the promoters have infused around Rs 270 crore to support debt repayment obligations. Although the SP Group has been able to successfully divest 258 MW of operational solar projects to a private equity firm in April 2020, the asset monetisation plan of the group could be delayed, given the current weak economic environment.

‘While the SP Group announced its plan to divest its entire stake in TSPL (Tata Sons Private Limited), and the Tata Group has expressed its willingness to buy out their stake, which is a positive development for SP Group from a long-term perspective, the valuation and timelines for the conclusion of the transaction are currently uncertain’, says the ICRA note. Recent reports say the SP Group has got a breather of two years following the K.V. Kamath committee’s approval for a one-time restructuring exercise to strengthen its balance sheet and reduce debt by monetising assets.

So what would a fair valuation of the SP Group’s stake in Tata Sons amount to? In September 2020, when it had decided to separate from Tata Sons, the SP Group suggested a valuation of Rs 1.78 lakh crore. However, the Tatas valued the stake at less than half that figure, saying that since Tata Sons as a whole had been valued at between Rs 3.8-4.3 lakh crore by chartered accountant Y.H. Malegam in 2016, the SP Group’s 18.6 per cent stake was worth about Rs 70,000-80,000 crore. For now, while the Tatas may have successfully restrained the SP Group from pledging its Tata Sons shares to raise capital, the buyback of shares from the Mistrys involves many complications. Both parties will need to agree on a valuation, and it is far from clear how the Tatas will fund the acquisition. The Tata businesses, except Tata Consultancy Services (TCS), are also highly burdened by debt.

Tata Sons, as a holding company, earns income from the dividends paid by its key subsidiaries, including TCS, Tata Motors, Tata Steel and Tata Chemicals. It reportedly earned a total equity dividend of Rs 24,000 crore from its various group companies in FY2020, with TCS alone contributing nearly 90 per cent of the total. But this will not be enough to buy the Mistry family stake. The Tatas will likely have to sell some of their sha­res in group companies. They could, for instance, sell a portion of their stake in TCS, of which Tata Sons holds 72 per cent. However, as a market source says, “It is unlikely the Tatas will want to reduce their stake in group companies at this juncture. Tata Sons could also raise long-term debt capital to buy out the Mistrys.”

When it comes to the Mistrys, experts say it would be best for the SP Group to sell its shares back to the Tatas at a fair value and exit in a cordial fashion. “Apart from the decision on Mistry, the SC has also upheld the conversion of Tata Sons into a private company. An investment in a private company like Tata Sons gives the SP Group no management or voting rights except for the annual dividend,” says H.P. Ranina, a noted Supreme Court lawyer. Moreover, the articles of association of Tata Sons are such that they can ask minority shareholders to sell their shares back to them or to parties they nominate. “It is a very precarious position for the SP Group. It makes no sense to approach the courts over valuation, so it is better to accept whatever fair valuation is offered. Moreover, they had paid a negligible sum for the Tata stake when they first bought it, and is incomparable with the current valuation.” Since the SP Group cannot sell or pledge the shares to a third party, they are, in a sense, as much of a burden as an asset. Ranina says that the Rs 70,000-80,000 crore that Tata Sons might offer the SP Group seems fair, but a fresh valuation could also be done by someone as trusted as Malegam. Crucially, this sum would also allow the Mistrys to pay off their debts.

Cyrus Mistry’s fight against the Tata Group will go down in Indian business history as one of the fiercest. He had challenged his removal at the National Company Law Tribunal, and when he did not find relief there, moved the National Company Law Appellate Tribunal (NCLAT), which ordered his reinstatement as chairman of the Tata Group in December 2019. However, the Tata Group escalated the case to the Supreme Court, which, after hearing the case for over a year, ruled in favour of the Tatas. Mincing no words, a bench comprising Chief Justice S.A. Bobde and Justices A.S. Bopanna and V. Ramasubramanian said, “In fact, it may be conceded today by Tata Sons that one important decision the board took on March 16, 2012 (the appointment of Cyrus Mistry as executive deputy chairman as a precursor to making him chairman) certainly turned out to be the wrong decision of a lifetime.” It blamed Mistry and the SP Group for kindling the fight with the Tata Group. “In any event, the removal of a person from the post of executive chairman cannot be termed as oppressive or prejudicial,” the SC judgment said. A mail sent to the SP Group asking for comments on the Supreme Court ruling went unanswered.

With the SPC getting a nod to go in for a one-time restructuring, the Mistrys should feel a bit relieved. They will do their best to strike new deals with banks to pare their debt. In that case, the SP Group will be in no hurry to sell its stake in Tata Sons, but would rather focus on bringing down its debt without having to depend on the stake sale. That might give the Mistrys some reprieve. The Tata Group also gets a clear path to pursue what it thinks would be the best to revitalise some of its sagging businesses and make them future-ready. The Mistrys, in the meantime, have some introspection to do, to revive their businesses and move beyond the bitterness of this protracted confrontation with the Tatas.